Lister Wilder the southern based construction, agricultural and groundcare distributor will, from Jan 1st, see its Thwaites territory extended to cover Sussex and Surrey. The extension follows the recent announcement that Jim Dicker of Jim Dicker Plant Sales, the distributor for the area since 2016, is retiring at the end of 2021.

Lister Wilder, founded in Oxfordshire in 1947, has been at the forefront of providing the market with leading construction, agricultural and groundcare machinery for over 70 years.

Lister Wilder Managing Director Charlie King said “We were delighted to conclude negotiations with Thwaites to extend our territory. The business is already well established and connected in and around the area, with branches in Surrey and Kent. We look forward to meeting and working with contractors and hirers in our new patch”.

In a joint statement the two Lister Wilder Area Sales Managers, Paul Mahoney and Paul Clarke said “This new territory will be shared; Paul M will cover east and west Sussex, whilst Paul C will cover Surrey. We have been working with Paul Rodwell from Thwaites for some weeks on a handover plan. We are both really looking forward to developing our new customer relationships and continuing the supply of the market leading Thwaites dumper range.”

Thwaites Distributor Manager South, Paul Rodwell said, “This is the perfect strategic fit for both Lister Wilder and Thwaites. The market in this part of the South East remains strong yet competitive, I look forward to supporting the Lister Wilder team to drive sales and market share from January and throughout 2022.” 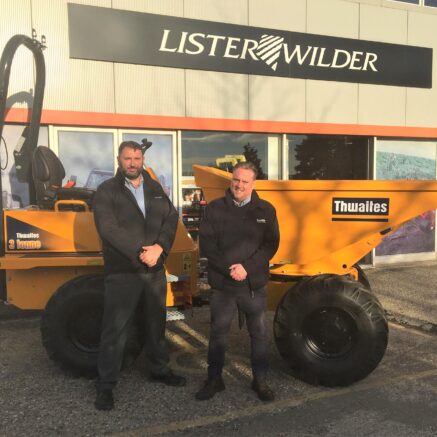