Thwaites General Manager Sales, Andrew Sabin recently took a call from a farm owner in the Cotswolds. The farmer, Pat, had rediscovered in one of his sheds what he believed to be a Thwaites agricultural machine, indeed if true, this might be one of the earliest machines the company had manufactured, the Thwaites Muck Spreader.
Andy was reliant on Pat’s description alone, but during the call it became increasingly likely that this might be a historic find.
From the description the machine that fitted the bill was the agricultural machine of the day, the Thwaites Muck Spreader.
Thwaites founded in 1937 by Basil Thwaites, manufactured those early agricultural machines in Leamington Spa, Warwickshire and to this day, 85 years later, that original site remains the home of Thwaites manufacturing.
Driven by the war effort agricultural manufacturing was in need of modernisation and an increase in output. In the early 1940’s Thwaites successfully manufactured forage harvesters and muck spreaders, a decade before the launch of the very first site dumper in 1951.
Andy commented, “It is not every day you get a call like this; I have worked at Thwaites for 21 years and apart from old photographs, I have never seen a muck spreader. So when I travelled over to meet Pat at his farm, it was with great interest and intrigue.”
Thwaites had agreed in principle that if the machine were of interest, they would acquire by making a donation to the local Sue Ryder charity at the request of Pat, in memory of his late wife Muriel.
On arrival at the farm, set in the beautiful rural setting on the outskirts of Cheltenham, Pat greeted Andy and escorted him to the machines resting place.
Andy Sabin takes up the story, “It was clear that this was indeed a Thwaites Muck Spreader. Whilst there was no plate or serial number, the design and flecks of red paint were enough to confirm that we had found one of the first machines every manufactured by Thwaites, here in the heart of the Cotswolds.”
Pat confirmed that he first remembered seeing the machine in the mid 1950’s, soon after he inherited the farm and land from his late father.
Thwaites were of course true to their word, arranging the payment to the charity in memory of Pats late wife to secure the machine…But what to do now?
The find was delightful, the owner charming and the cause worthy, so Thwaites did not want to sit on its laurels. What was the best and indeed the correct way to return the machine to its former glory?
Thwaites contacted construction and agricultural colleges in the area to enquire if the machines renovation, as a project, by their next intake of apprentices might be of interest. The company was delighted to discover that interest was indeed high and after considerations, they decided to partner with the new and first co-funded industry led construction school AccXel, based in Cinderford, Gloucester, just 30 minutes’ drive from the find.
The college is a state-of-the-art centre of excellence aimed at inspiring, training, and connecting people entering and advancing within the UK construction industry. The college is co-funded by the Governments Getting Building Funding awarded by Gloucestershire’s Local Enterprise Partnership and the KW Bell Group. The college was founded by Nicola Bird who is third generation of the family group and sits as the companies Managing Director.
Find out about AccXel here: https://www.accxel.co.uk/
Under guidance from Thwaites, the next intake of construction apprentices will now have the chance to renovate and return this piece of Thwaites history to its former glory.
The story is not yet complete, Thwaites looks forward to partnering with AccXel and further updating readers and followers on social media, of the find and subsequent journey of the Thwaites Muck Spreader. 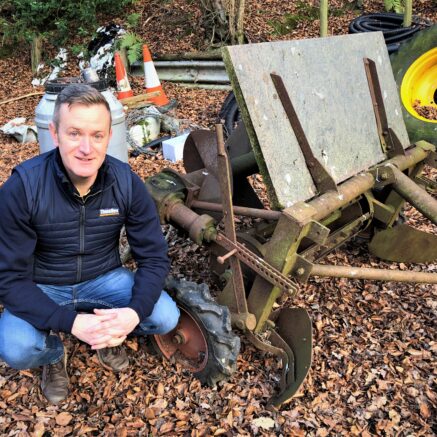